Missy and Sal are 1 year old female and 8 month old male Black and White Domestic Short-Haired Cats. They are mother and son, aged one and eight months, so almost like brother and sister except when she puts a paw on his head and washes behind his ears! Their owner died so we don’t have much history on them but both will seem very shy when you come to meet them – in fact they are likely to hide behind the bed, so you’ll need to be a patient with them, and do a little coaxing when they move in with you. Missy will come around pretty quickly, then she’ll show you that she is a little ball of endless affection! She absolutely loves attention, and will always be somewhere wrapped around you or on you looking for cuddles and strokes! She’ll be easy, you’ll love her very quickly! Sal will capture your heart as you watch him lean into your hand as you stroke him whilst he’s hidden behind the bed, trying to build up the courage to come out to play, and to eventually stealthily wind his way onto your feet as you snooze! He’ll growl and hiss sometimes if you move too quickly and startle him, but even at his most terrified he has never so much as scratched me. They both really love to play, so that’s probably the quickest way to their hearts! 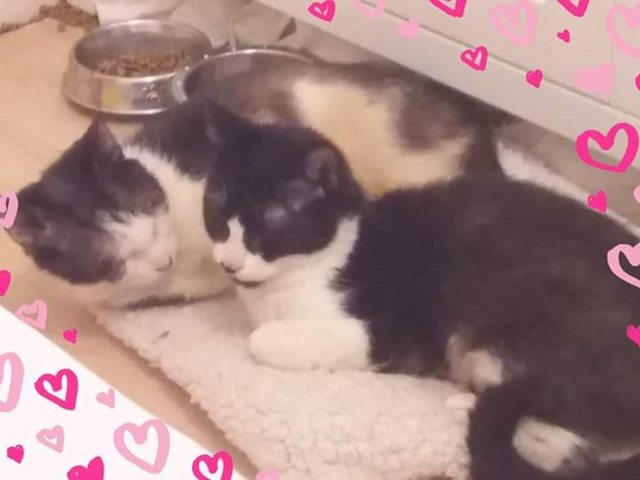 Both of them are going to need some extra tlc though, as Missy will lose patches of her hair if you don’t keep on top of her flea/worm treatment, and we think she’s going to need steroids to manage her skin, in the form of a tablet a day (little piece of ham works well!), that will probably cost you about £5 per month. Sal gets an upset tummy really easily, so I have them both on Purina Sensitive and it seems to have worked and settled him nicely.

When you meet them you’ll see that they both still show the signs of the time they were trying to survive alone after their owner died and before a kind man got them to safety with the RSPCA. Missy’s fur is still recovering, and Sal has brown staining on his fur under his tummy (maybe from hiding under sheds) – the vet recommends that this just grows out. They will steal your heart as you watch them take their first steps out towards you, then come for cuddles, then finally play! And when Sal comes up to Missy and flops down, offering his head up for grooming you’ll just melt! They’ve been through a lot in their short lives, they really need some love and stability now. Could you be their forever home?

Find Out More About Adopting This Cat

Find Your Cat by:

Select by Age, Sex or Breed